EURUSD Moves Up Around 1.19 In Near Term 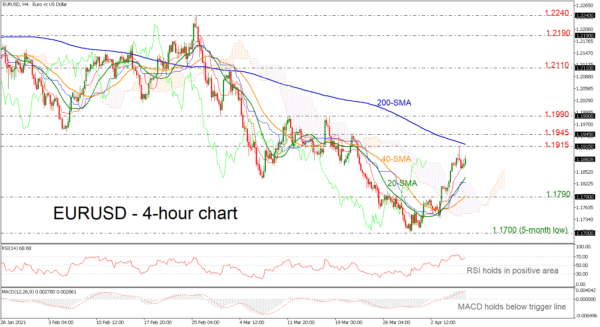 EURUSD eased below the 1.1900 psychological level again, finding resistance at 1.1915 and the 200-period simple moving average (SMA). However, the rebound off the five-month low of 1.1700 is still in place, pushing the price well above the short-term SMAs.

From a technical perspective, the RSI indicator is showing some positive signals and is approaching the overbought territory, though the MACD is holding below its trigger line in the bullish area.

More advances could take the pair towards the 1.1915 barrier, which stands marginally below the 200-period SMA. Above that, the 1.1945 resistance and the 1.1990 hurdle could attract traders’ attention.

On the other hand, a decline lower could meet the 20-period SMA at 1.1840 ahead of the 1.1790 support, which overlaps with the 40-period SMA. Further downside movements could drive the bears until the 1.1700 handle, taken from the latest lows.

Overall, EURUSD has been in an upside movement in the very short-term, but inthe broader outlook, the price is still negative.