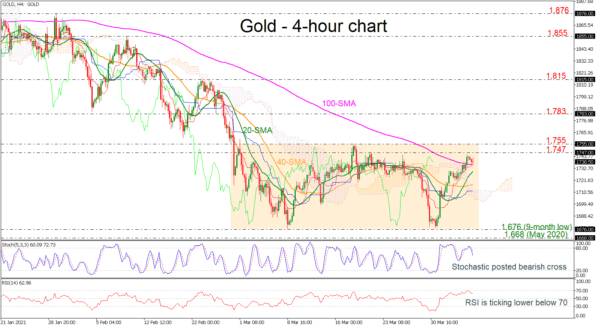 The gold price has reversed back down again after finding resistance around the 1,747 mark, holding marginally above the 100-period simple moving average (SMA). The price has been moving within a consolidation area with the 1,755 barrier as upper boundary and the 1,676 support as lower boundary; a range that has held since February 26.

Momentum indicators are pointing to a negative bias in the short term with the RSI just below 70 and the stochastic oscillator easing from bullish territory and it has posted a bearish cross within the %K and %D lines, suggesting a downside reversal is nearing.

Further losses below the 100-period simple moving average (SMA) should see the 20-period SMA, currently at 1,730 acting as a major support ahead of the 40-period SMA at 1,718, a level that is also close to the Ichimoku cloud. A drop below the cloud would reinforce the bearish structure in the very short-term and open the way towards the next key support level of the nine-month low of 1,676.

In the event of an upside reversal, the 1,747 barrier and the 1,755 upper boundary could as crucial resistances before being able to challenge the 1,783 line, taken from the inside swing low on February 24.

In conclusion, the yellow metal is neutral in the near-term and if the price remains above the 100-period SMA and jumps above the significant 1,755 resistance, such a move could shift the market to bullish in the medium-term.