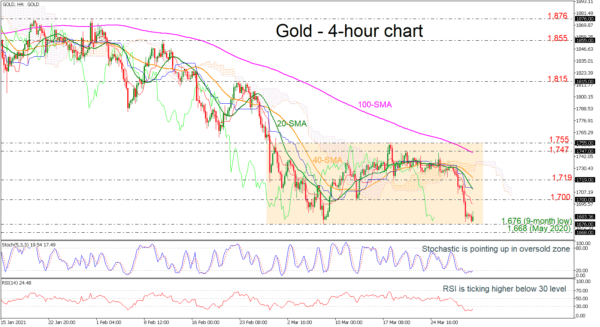 The gold price tried to test the nine-month low of 1,676 again, but it is returning slightly higher over the last 4-hour session. In the very-short-term, the metal has been in a strongly bearish tendency after the pullback from 1,747.

The momentum indicators are confirming the recent upside move, with the stochastic posting a bullish crossover in the oversold territory, within the %K and %D lines, while the RSI is heading north below the 30 level.

A jump higher could find immediate resistance at the red Tenkan-sen line currently at 1,696 ahead of the 1,700 psychological number. Even higher, the yellow metal could hit the 20-period simple moving average (SMA) at 1,710 ahead of the 1,719 resistance which stands near the 40-period SMA. More upside pressure could send the bulls towards the 100-period SMA around the 1,747 barrier.

Summarizing, gold prices is recouping some losses of the bearish move in the very short-term, however, the broader outlook has been neutral since February 26.