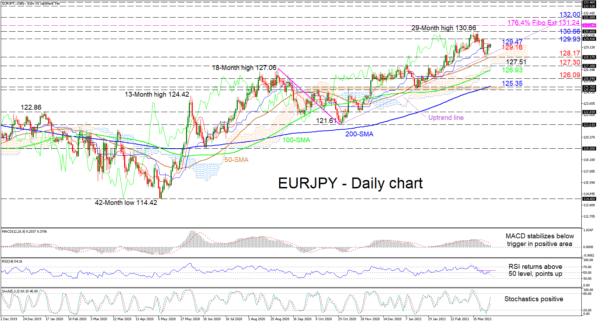 EURJPY’s recent pullback from a 29-month high of 130.66 has been countered by a rebound off the uptrend line, pulled from the 121.61 trough. The bullish simple moving averages (SMAs) are defending the positive structure, while the bounce off the uptrend line appears to have provided the climb with fresh footing. The rising blue Kijun-sen line is also backing the ascent in spite of the dipping red Tenkan-sen line.

The short-term oscillators are indicating that the pair may be regaining essential positive momentum. The MACD, although in the positive region and below its red trigger line, has stabilized and may be regaining the upper hand. The RSI has nudged back above the 50 level and looks set to improve, while the positively charged stochastic oscillator is endorsing positive price gains.

If the established foothold off the diagonal line prods the pair above the blue Kijun-sen line at 129.47, initial resistance could arise from the 129.93 nearby high before the price retests the 130.66 multi-year top. Should bullish risks prevail, the next resistance barrier could be found at 131.24, which happens to be the 176.4% Fibonacci extension of the down leg from 127.06 to 121.61. Extending the hike even further could then bring into proximity the 132.00 handle.

Otherwise, if positive momentum subsides, the sturdy uptrend line could draw focus once again. Next key boundaries to oppose the decline are the 128.17 border, where the cloud’s upper surface and the 50-day SMA both currently reside, followed by the zone from the floor of the cloud at 127.51 until the 127.30 barrier. However, a deeper retracement may meet the 100-day SMA at 126.93 before targeting the 126.09 low.

Summarizing, for EURJPY’s bullish outlook to endure, the price would be required to remain above the uptrend line, the SMAs and the 128.17 trough.