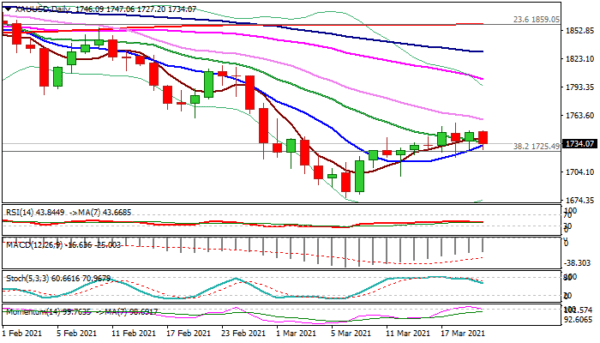 Spot gold price fell on Monday as investors moved into safety of the US dollar, as markets were hit by fresh wave of uncertainty on Turkey’s abrupt decision to replace its central bank governor with a critic of high interest rates.

Current situation in Turkey, one of major buyers of gold, lifted dollar and signaled that significantly weaker lira would slow Turkey’s gold purchases.

Fresh easing adds to initial negative signals that recovery leg from $ 1676 (Mar 8 low) is stalling, as the action repeatedly failed to clearly break above $ 1746 barrier (50% retracement of $ 1816/$ 1676 downleg). The 14-day momentum on daily chart is breaking into negative territory and stochastic is heading south after the indicator diverged from the price direction and reversed from overbought territory, with break of $ 1725 pivot (Fibo 38.2% of $ 1676/$ 1755 upleg) to further weaken near-term structure.

Conversely, the metal’s price would remain in directionless mode which extended into fourth straight day, on repeated close above 10DMA ($ 1731).