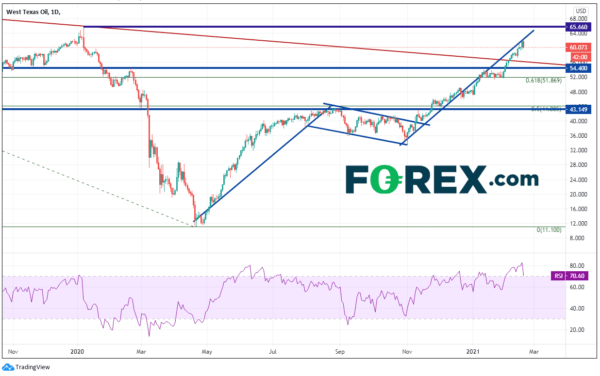 West Texas Crude Oil dipped back under $ 60 a barrel as traders took profits ahead of PMI data after what continues to be a wild ride! There have been many reasons to be bullish the black gold. The American Petroleum Institute has shown weeks of draws to begin 2021. In addition, the decrease in output this week due to the deep Texas freeze this week helped push WTI to nearly $ 62.25, before forming a near bearish engulfing candle on daily timeframe. Price ended the day near $ 60. Compliance by OPEC+ on agreed production cuts has also helped push WTI to pandemic highs.

But traders know that Texas will thaw out and refineries will be back online soon. Temperatures are expected to be in the mid-50s and 60s (Fahrenheit) over the weekend in Houston. In addition, nothing has changed on the pandemic front, as traders are still hoping demand will pick up around the world. On Friday, February PMIs will be released. Manufacturing PMIs around the world have been mostly above the expansion/contraction 50 reading for the past few months. Expectations for February are no different. If the manufacturing PMIs are worse than expected, the price of oil may decrease.

Depending on whether you are looking at the front month futures contract, the ETF, the CFD or the cash market, WTI fell to near $ 0 on April 22nd! Since then, price has rallied. In the late summer and early fall of 2020, Crude oil traded sideways between $ 35 and $ 42 before breaking higher and forming a flag. The target for a flag pattern in the length of the flagpole added to the breakout point. In this case the target is near $ 65. Price fell $ 2.75 short of that level today! Yesterday, the RSI was near 82 and today it has pulled back near neutral territory, just above 70. If price achieves its target of $ 65, the next level of resistance is the January 2020 highs near $ 65.66.

A 240-minute chart shows where price may pull back to, in terms of support levels. $ 60 acts as phycological round number support and trendline support. Below there, the 38.2% Fibonacci retracement level from the January 31st lows to todays highs crosses at $ 58.18. The 50% retracement from that same time period crosses at $ 56.92, nearly 5% lower than current levels. 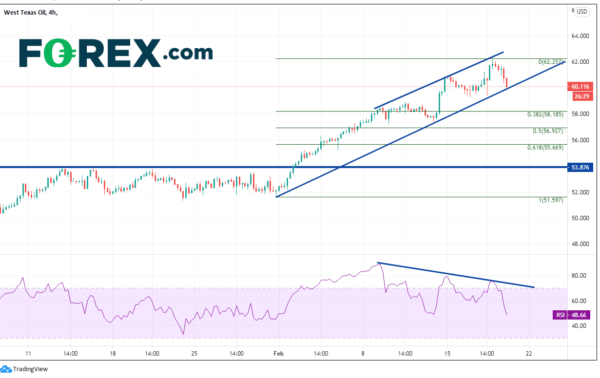