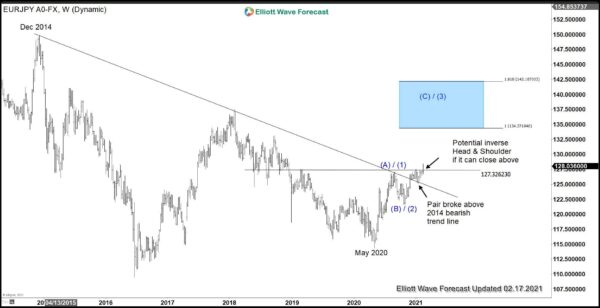 The Japanese Yen is weak against all other most-traded currencies, demonstrating market sentiment favoring riskier currencies. Japanese Yen is traditionally considered as safe haven currencies, and it tends to appreciate when there’s risk aversion in market. The positive outlook for vaccine rollouts and fiscal stimulus in various countries, especially the United States, contribute to this risk appetite rally.

Japan’s recently better-than-expected economic data further added to the market’s optimism. Japan’s latest GDP expanded by 3% in the fourth quarter.This is better than the median estimate of 2.4% by analysts. Annual GDP rose by 12.7%, which is a far bigger increase than the 9.5% expectation by economists.Below we will take a look at the technical picture of EURJPY.

Weekly chart above shows a higher high (bullish sequence) since May 2020 low. A 100% – 161.8% Fibonacci extension in (A)-(B)-(C) can see pair continue to extend higher towards 134.3 – 142.1. We can also see that pair manages to break above long term bearish trend line from 2014 peak, bolstering the view that pair can see more upside. In addition, there’s a horizontal support/resistance line around 127.3. A close above the level on weekly basis could suggest continuation higher with limited downside to around 126 – 127 if there’s a pullback. 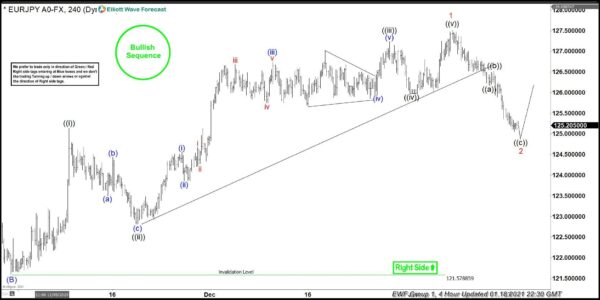 A month later, we are now at 128 as 4 hour chart below shows and we remain long EURJPY with a risk free position. 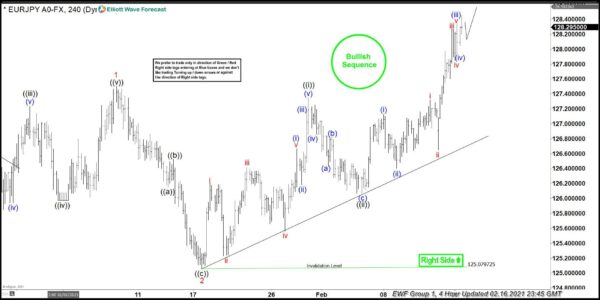