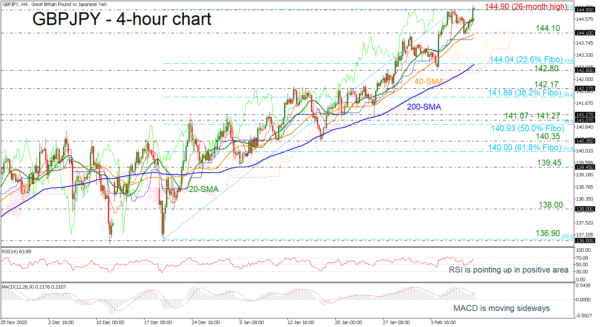 GBPJPY is edging higher after the bounce off the 144.10 support, recording a fresh 26-month high above 145.00. In trend indicators, the Ichimoku lines are pointing upwards, while the simple moving averages (SMAs) are following the price action. The RSI indicators is heading north towards the 70 level, while the MACD is ticking up in the positive area.

In case the buying interest intensifies, the next resistance could come at 147.95, taken from the peak on December 2019. However, the pair may pause its run at the 146.00 and 147.00 psychological levels.

Summarizing, GBPJPY has been in an upside tendency since December and only a drop beneath the 200-period SMA may change this outlook.