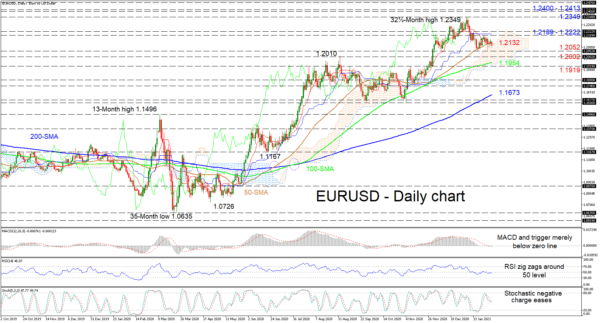 EURUSD is currently edging sideways around the 50-day simple moving average (SMA) and crawling into the Ichimoku cloud, after a retracement from the recent 32½-month high of 1.2349. Despite the retraction, the slowed negative bearing in the red Tenkan-sen line and the flattening of the blue Kijun-sen line are both backing the stalling price action. Nonetheless, the climbing SMAs are retaining a bullish tone, which is nurturing the positive structure.

Evaporating directional momentum is apparent in the short-term oscillators. Lately, the MACD has been trailing the zero mark and now, together with its red trigger line, has slid ever so slightly below it. The RSI recently has been flirting around its neutral threshold and has now only just deflected off it in bearish territory. The stochastics’ negative bearing seems to have eased slightly, hinting of some weakness in bearish sentiment.

In a negative scenario, a dip deeper into the cloud from 1.2132 may then encounter early support from the 1.2052 trough. However, receding further, the pair could next meet downside friction at the 1.2002 barrier. Should additional losses unfold, the price may challenge the 100-day SMA at 1.1954 – in the vicinity of the cloud’s lower band – ahead of the 1.1919 border.

If the pair gains traction around the cloud’s upper frontier, initial resistance may originate from the section of 1.2189-1.2222, which also encompasses the blue Kijun-sen line. Surpassing this, the price could re-target the multi-year top of 1.2349. Conquering the peak too may reinforce confidence into the climb, driving the bulls to aim for the 1.2400-1.2413 limiting boundary.

Summarizing, EURUSD’s bullish tone may remain robust should the pair manage to hold above the SMAs, the 1.2052 key trough and the Ichimoku cloud.