WTI Futures At A Standstill As Bullish Drive Wanes 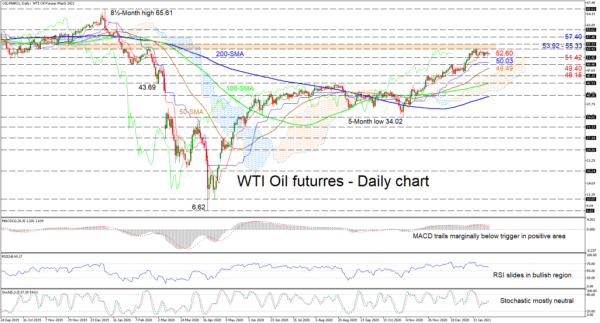 WTI oil futures’ ascent appears to have hit a snag following the near three-month uptrend from the 34.02 trough, which stretched to a 53.92 high. The Ichimoku lines are reflecting the freeze in positive momentum, while the climbing simple moving averages (SMAs), are all endorsing improvements in the price of the commodity.

The short-term oscillators are also demonstrating the latest price consolidation but directional hints seem to be fairly subdued. The RSI and the MACD – a tad below its red trigger line – are gliding in bullish territory. Furthermore, the stochastic oscillator is somewhat even, not conveying any clear directional price favouritism.

If buying interest intensifies pushing the price above the red Tenkan-sen line at 52.60, heavy resistance could arise from the section of 53.92-55.33, which also encompasses the 54.62 crucial peak where oil’s sell-off snow-balled back in February 2020. Triumphing above this key border, the hike in the commodity may then seek to challenge the 57.40 inside swing low from January 15.

However, if sellers steer the price down, immediate downside constraints could occur at the 51.42 low, before a support zone from the blue Kijun-sen line at 50.03 until the 49.40 barrier, bares its claws. Diving from here may create negative impetus to exam the 50-day SMA beneath at 48.49 and the cloud, ahead of the 46.15 trough.

Concluding, despite the stall in the uptrend, oil futures maintain their bullish bearing above the 50.00 mark and the SMAs.